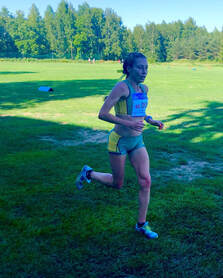 World Masters Athletic Championships Finland
Katie Seibold competed at these championships. Her results were:
8km Cross Country - 8th in 45+ women in 30:10.
Ended up with a massive heel blister so missed one track event but did the
1500m - 7th in 45+ in 5:31.91 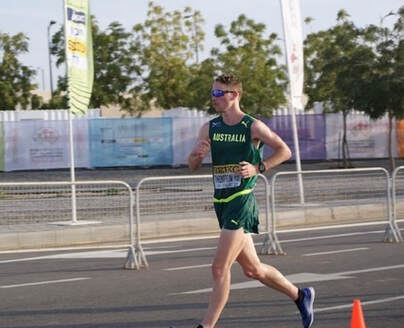 Full results are at http://athsvic.org.au/wp-content/uploads/full-results-bh-classic-1.pdf?fbclid=IwAR1YWZv7cdeaodVzWKpHEjJW98eu3BIwM7WOJzfbeAjiPbB_umAFX686CyA 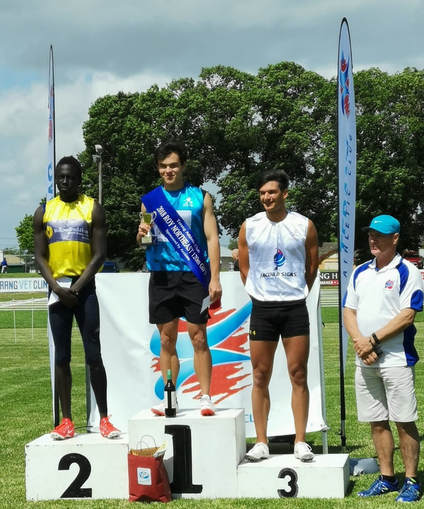 23/10/2017 VSSSA State Track and Field Championships held at Lakeside Stadium
MPAC was well represented today at the Victorian Secondary Schools Sports Association State Track and Field Championships.
Jeremy Fraser place third in the Open 2km steeplechase.
Taj Davies was oh so close in his 800m. He was beaten in a photofinish for first place.
Hayley Silvester came 2nd in the 100m Hurdles in a pb time, 3rd in the 100m sprint, 1st in the 200m, 1 in the 400m in a 3 sec pb and her relay team was 3rd. A big day!
Mehdi Hassani was 3rd in the Para 100m.
Harry Phillips came first in his 800m and broke the 2 minute barrier for the first time. 1:59.99 from photofinish measurement. He also place 3rd in his 1500m.
Will Hunt placed 4th in his 100m
21/09/2017 End of XCR17 Season Summary.
With several of our runners not returning or only running infrequently, and the generally low numbers participating this season, we did not do as well as in previous seasons.
Teams
Men Division 2 - 14th (last)
Men Division 4 - 12th
Men Division 6 - 11th
Men 40+ - 18th (out of 27)
Men U20 - 6th
Men U18 - 14th
We were unable to field te 4 required runners for our Women's Division 2 team.
The Mens and Womens Division 2 teams will be relegated next year.

Individual Rankings
Debra Neil - 7th in 40 - 44 yr age group
Michael Bishop - 9th in 45 - 49 yr age group
Callen Goldsmith - 2nd in U20 Men.
Ethan Anthony - 5th in U18 Men.
17/09/2017 Sri Chinmoy 10km at Burnley
Michael Bishop - 36:23 4th overall and 1st in age group.
Great work Michael, especially backing up the day after the Princes Park Relays.
Sandy Point Fun Run held on Sunday 27/08/20167
Michael Bishop ran 38:43 to place 7th overall and 1st in his age group.
Great work Michael!
Athletics Australia NationalCross Country Championship held at Woolongong on Sat 26/08/2017
U18 Men 6km - Ethan Anthony ran 20:30 to place 29th.
Well done Ethan!
Devilbend Fun Run. Sunday 6th August 2017
A hugh thank you to Richard Does who was our Race Director for Devilbend 2017. This year saw the largest number of entries yet. It was a shame the weather was not too good which put a few people off turning up to run.
Thanks to all the volunteers who helped set up, take down, course marshal, etc.
This was Richard's fifth year and last year as Race Director. We are looking for a club member or friend of the club to take over. Please contact us if you would like to be a part of this event.
Victorian Masters 3000m Championship 23/04/2017.
Michael Bishop was 1st in the 45 - 49 age group in 10:09.
Well done Michael particularly in backing up the day after racing at Jells Park!
Athletics Victoria XCR17 series kicks off with the Jells Park Relays 22/04/2017
We had 3 teams. The U20 Men had a win!
Full MPAC results are here.
Full AV results are here. 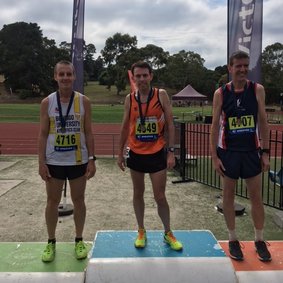 Falls Creek Training Camp Fri 30th Dec to Sun 8th Jan.
Only 12 people went this year although we had one extra for two nights. The camp went well. There are pictures from the camp in a slideshow on the Falls Crekk Training Camp page. We have booked only 20 beds for the next camp at this stage.
Devilbend Date set for 2017.
It will be Sunday August 6th!
Review of week ending Sunday 11/12/2016
Monday 5th - Jeremy Fraser competed at the Australian Schools Knockout Final in the 1500m. He came 8th out of 18 in a time of 4:23. His team came second.
Tuesday 6th - Michael Bishop competed in the fastest heat of the Lower Grades of Zatopek. He came 16th out of 22 in a time of 36:03.53
Thursday 8th - Zatopek. Taj Davies competed in the De Castella U15 1500m. Taj came 12th in a time of 4:43.64. Jake Stevens competed in the 800m. He was 10th in a time of 1:53.16. It was so close he was only one step from 4th place.
​Sat 10th - Rd 8 of AV Shield. Results are here.
Well done all.
Seaford Wetlands Fun Run held on Sunday 27th Nov 2016
10km event:
Steven Bonfadini 2nd in 34:59
Michael Bishop 6th in 36:45. Michael backing up after competing in the Relay Championships the day before.
​Nice running guys. 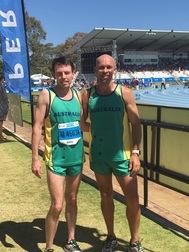 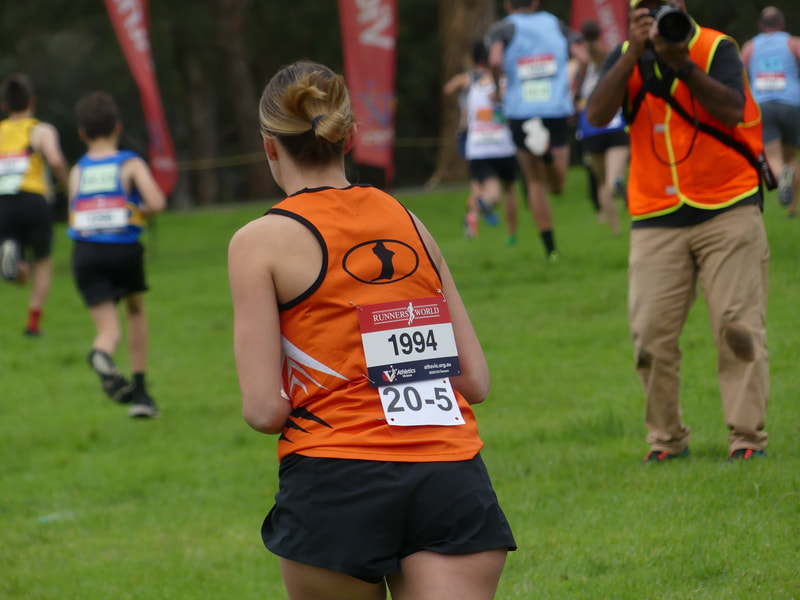 Sunday 4/09/2016 AV XCR16 Rd 9 at Burnley
Women's Div 2 - 3rd
Men Div 2 - 11th
Sat 20/08/2016 Australian Cross Country Championships held at Stromlo in Canberra.
MPAC had two athletes compete in National Cross Country Championships.
Callen Goldsmith in the U18 Boys. Callen was able to do little training since the AV Albert Park race where he bruised tendons in his foot. In his 6km race Callen did 20:21 to place 39th out of 79 starters.
Mehdi Hassani competed in the U20 AWD as a T13(mildest form of vision impairment). In his 3km race he did 12:08 which was converted to 37.96% against what appears to be the 1500m record for his disability. This placed him 5th out of 13.
Well done to both boys on making the team and for their efforts on the day.
14/09/2016 City to Surf Result.
Michael Bishop: 51:11 for 150th place. 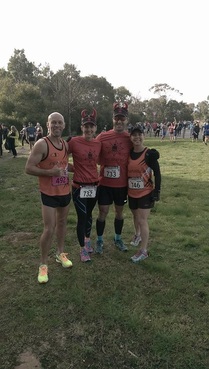 7th August Devilbend Fun Run
This was our major fundraising event for the year. Record entries. The weather was perfect and a great day had by all. Lots of smiles and happy people.
Thanks in particular to Richard Does our Race Director and to HockingStuart who not only sponsored the event but did a lot of behind the scenes work with email and sms send outs as well as organising some other sponsors for the event. Thanks to all those who volunteered on the day and / or helped set up the day prior.
Results are here. 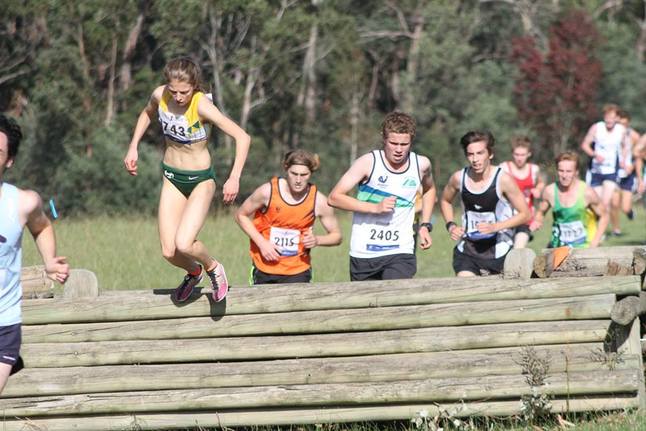 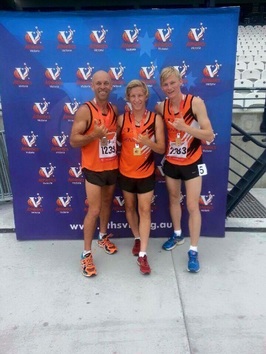 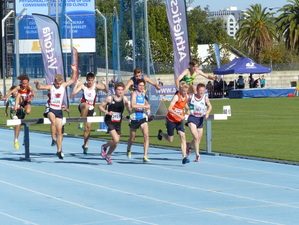 
AV Shield Round 1 10/10/2015
With the Melbourne Marathon only a week away, some were fine tuning their preparations. This left a smaller than usual group at the first round of Shield. There were some good performances. New comer Harry Phillips did a pb in the 1500m. Full results as known are here.

AV Shield(track and Field) starts on 10th October.
The Open Men did well in Division 2 last season. We are hoping that this continues and that we achieve some good results in other teams as well. We have some new athletes in the junior ranks and are hoping that a few more will join as well. All the best for the season!

9/08/2015 Devilbend Fun Runs
Thank you to all those who contributed to the Devilbend Fun Runs whether you helped set up Sat / Sun, did duty on Sun, ran in the event or helped pack up. In particular to Richard Does our Race Director.

1/08/2015 AV XCR15 Rd 7 Brimbank Cross Country
Just about everybody who ran this event last year improved their time this year. The teams scored better this year as well. Great job all. Unfortunately we were one short to have a third men's team. MPAC only results are here, full results are on the Athletics Victoria website.

13/06/2015 Athletics Victoria Bundoora and All Schools Cross Country
Good running from the Div 2 women with 2 ladies in the top 30. A big thanks to Debra Neil for continuing even though she was struggling with her breathing. About 20 points better than last year.
The Div 2 men this year had 4 in the top 100 compare to only 2 last year. About 120 points improvement! I am predicting another win in Div 5 and Div 7 for the men. Great to see Rohan Day back in the field!

3/05/2015 Wings for Life World Run
In this event, the runners start. A chase car gives them a half hour start the heads off initially at 15km/hr. It gradually gets faster at a set rate. This is a world wide event.
Rohan Day - 37km (not caught by chase car)
Richard Does - 28km easy run
Jake Stevens - 36km
Mike Manders - 45km
Cam Hall - 44km

1/01/2015 Athletics Victoria Open Track and Field Championships.
Congratulations to Jake Stevens who placed 6th in the 800m final after progressing through heats and prelims. In a tactical and windy race his time was 1:52.8. Also congratulations to Steph Kondogonis who was 4th Victorian in the 3000m Steeplechase in a time of 11:28. Troy McGill, who is still in U20, also competed in the 1500m and came 9th in his heat.

13th - 15th Feb 2015 Athletics Victoria Junior Track and Field Championships
We had 8 juniors compete over the weekend. A couple of other entered but did not compete. The best results were: Kyle Bird 2nd in U20 5km walk, Callen Goldsmith 2nd in U17 3000m, Joe Rickard 3rd in U15 3km Walk, Ethan Anthony 3rd in 2km steeplechase, and troy McGill 3rd in U20 5km. Well done to all who competed. Full results here.

7th Feb
Kyle Bird competed in the Athletics Australia Canberra Track Classic Open 5000m Walk. He achieved a time of 23:26.30 and came 7th in a race that had all the 2014 Commonwealth Games representatives.

31/01/2015 Athletics Victoria Shield Final
The Division 2 Men's team came 4th out of 11 teams. The members that competed were:
Brett Anthony, Kyle Bird, Shane Bishop,  Steven Bonfadini, Lachy Freestone, Jamie Mayhew-Sharp, Jake Stevens and Trent Wallace.
Great work guys! Thanks for your efforts. Thanks also to the other members who competed during the season but were unable to make the final.

Richard Does was the sweeper for the 56km.

Apologies if we missed anyone.

10/01/2015 AV Shield Round 9
The Division 2 Mens team did well coming first for only the second time. They are now very close to making the Shield Finals. This was helped by Jake Stevens winning his 1500m and going under 4:00.00 for the first time. Lachy Freestone also won his Discus and Javelin. Last round for the season next week.


1/12/2014
MPAC has a new Track and Field coach Jason Hodson.  We welcome him on board. Jason is currently a Level 2 Adv in Jumps, Sprints & Hurdles. This will compliment our coaching groups and allow MPAC to offer almost the full spectrum of events. Jason holds a permanent position with Little Aths Vic State Junior Development Squad as a horizontal jumps coach as well as being an Aust. Sports Commission athletics coach in schools. Jason is the current President of Southern Peninsula Little Athletics Club. He is hoping to funnel his club and school athletes into MPAC. He coaches on Tuesday & Thursday 4.00 - 6.30pm at Truemans Road Reserve Rosebud West, and is hoping to start up some training sessions at Mornington Secondary College on Mondays.

DEVILBEND 5km, 10km & Half Marathon (17th August 2014). Online entries received before 1st August will have their Race Number and Timing Chip posted to them. Online entries will still be available until 13th August. These entrants will need to collect their Race Numbers on the day. On the day entries will be taken if the field is not full, cash only.

2014 AV Sandown Road Relays 12/07/2014
With best Open Male, Cam Hall, and best Open Female, Steph Kondogonis, injured the club's top teams still did well with a 3rd in Div 2 Men and a 5th in Div 3 Women. The Div 2 Men's results was helped by the inclusion of U18 Troy McGill and Jake Stevens opening his AV season. The women were fortunate that newcomer Julie Cann had just joined up and registered with AV 8 days prior or they would not have had a team. We have not had enough leg speed for the Road relays in our highest mens teams over the last several years. Usually we have been better at the longer events. However, this year we did well!

New members, or those members who did not register with Athletics Victoria last season but wish to do so this season,are also eligible for 50% of their Athletics Victoria registration. They will need to contact the MPAC Registrar at registrar@mpac.org.au to be added to the list supplied to out online registration company.